A large area of Southwestern Japan was recently hit with record rainfall, and as of the last time I checked the news report, more than 90 people had passed away from this latest natural disaster, and dozens more were still missing. Rescue workers are working hurriedly to save more people as floodwaters rise, and landslides continue as the fragile, wet earth is exposed to more and more water.

Our county in Hyogo prefecture was one of several that received purple-level (the highest level) emergency warning, and although we did not have to evacuate, our alarms blared through the night at 11:30pm and again at 2:30am on July 6-7th as rain hurtled toward the ground.

It was the first time either of us had heard phone and radio alarms related to rainfall, which are usually reserved for severe earthquakes. My husband and I have lived through multiple natural disasters and dangers in Japan, including typhoons and earthquakes.

It can be easy to become desensitized to the grim death counts published by the media, or for each disaster to seem like yet another false alarm. 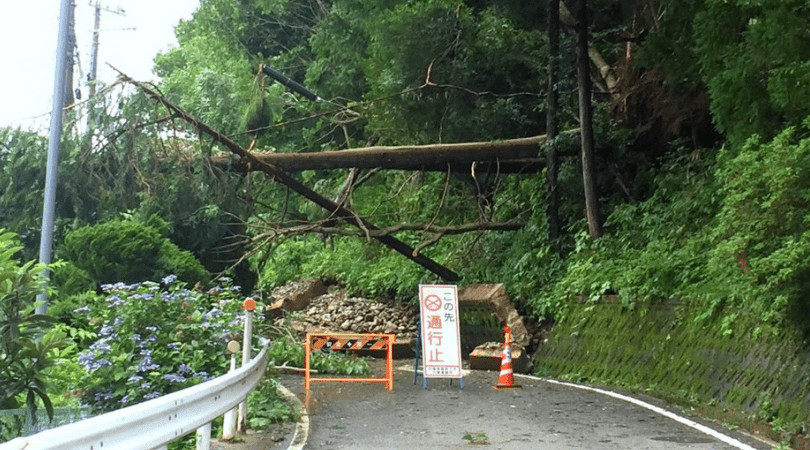 (Pictured: fallen trees in Hyogo after the heavy rainfall in Southwestern Japan in July of 2018)

Earthquakes are common in the “ring of fire” (the name for an earthquake-prone region of the earth that includes Japan), and after hearing alarms go off every year, your adrenaline starts to come in shorter supply. Japan is resilient, but its people are used to facing the possibility of death again and again, and become resolved to fate.

Perhaps this desensitization is why when Hawaii faced a nuclear missile alert on January 13, 2018, Japanese residents and tourists reportedly reacted calmly.

Meanwhile, other Hawaiians and tourists panicked, ran, and tearfully lowered their children into storm drains, hoping that it would be safer than outside nuclear exposure.

Later, of course, the missile alert was reported to be a false alarm (see here, and here).

Whether this distinctly Japanese resolve to fate in the face of natural disaster helps or hinders long-term and split-second emergency decision making is something worth thinking about. For example, would more people survive if they were quicker to evacuate in natural disasters? Would more families prepare emergency bags?

My husband and I also considered our emergency preparedness.. after moving to the countryside, creating an earthquake/disaster bag was not at the top of our priority list, even though since our move, there has been both a “low 6” level earthquake (on the Japanese scale) in Osaka, as well as this week’s torrential rain.

The rain has finally stopped (at least for now), and Masashi and I had a chance to survey the damage from the most recent storm.

2 out of 3 of the roads in front of our house are still closed, and within 5 minutes walking distance are multiple fallen trees, a crumbled stone wall, another road blocked off by a landslide, some damaged cemetery sites, and farming irrigation systems that still rush with water.

The roof of our storage building leaked, and despite the plastic “buckets” (actually plastic drawers) that we laid underneath the dripping as soon as we discovered what was happening, there is still damage to the tatami floor, and mold on the ceiling.

We were also out of power for about 6 hours after the worst of the storm, but we know that what our area has been through the last few days is negligible compared to the damage within an hour or two drive of our home, and other prefectures such as Hiroshima that were hit particularly hard.

Yet as the blue sky finally makes its appearance from behind the clouds for the first time in about a week, and as our bed-sheets flutter in the clean, warm air, it is easy to forget another “close call” with nature. Rescue crews, carpenters, road workers, and many others make quick work of repairs, and peace is often quickly restored.

Yet, I believe that it is important to remember the people who are still suffering, still standing in front of a home that has been washed away, still mourning family and friends that have been lost, and still feeling acutely loss and fear.

It is also important to remember that we are blessed – so blessed. We have so much to be thankful for at every moment.. whether it is the ability to drink water or use power, to live in a home, or to have family close.

I am certain that this will not be the last natural disaster we will face, but each event reminds me of the value of what we already have, and that we truly do not know the hour when we will die. The best we can do is love at every moment, knowing that our life is in God’s hands.

While Japan may be a resilient country, it is going to take time and effort for the many regions affected to recover from this most recent disaster.. but there are also ways to help. If you are interested in donating to relief efforts, please see (here). **Note that the inclusion of the previous link does not necessarily mean that we endorse any of the organizations listed. We advise to thoroughly research any non-profit or charitable organization before donating.

If you are unable to donate toward relief, please consider praying for the people and rescue efforts that are still underway. Pray not just for relief from disasters (which will come again), but for hope. For peace, love, and faith in the midst of darkness.

As walls shake and rivers overflow, and as hearts become calloused, pray not only for physical safety, but also spiritual healing. And no matter how distant or near any global disaster including this one may be, let us practice thankfulness, knowing that every day is a blessing.

Have you ever experienced a natural disaster?